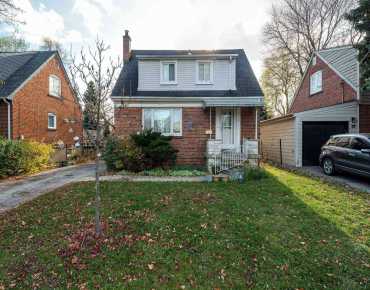 Clanton Park, sometimes called Dublin Heights or Wilson Heights, is a North York community bordering Downsview Airport, a retired air force base and testing facility for Bombardier Aerospace. The city of Toronto plans to redevelop these 520 acres of Downsview area into a new community.

Clanton Park runs from Bathurst Street on the east to Sheppard Avenue on the north, Downsview Airport on the west, and Highway 401 on the south. A sizeable Jewish population revolves around the community's many Jewish cultural and learning centers and synagogues.

Real estate at Clanton Park ranges from single detached bungalow-style homes built in the 1950s to new high-rise condos completed in recent years. Most detached homes are situated on suburban lots with an average of fifty to sixty-foot frontages. In recent years, many elder houses have been gradually transformed into custom-built modern homes. Several Mid-rise to high-rise condo buildings and rental apartments are located in the community at Bathurst Street, Sheppard Avenue, and Wilson Avenue. Some ongoing condo projects are currently under development at the southwest corner of the community around Allen Road and Wilson Avenue. About 55% of housing in Clanton Park was completed before 1980, and another 17% was constructed after 2011. Roughly 46% of the population in Clanton Park are tenants.

About 56% of the residents are of European Origin, and 28% are of East and Southeast Asia origin. The top ethnic origins in Clanton Park were: Filipino, Polish, Italian and Russian. Clanton Park is home to a sizeable Jewish community, and several synagogue congregations are here. The neighborhood along Bathurst is known for its Russian populace, with a large Russian Jewish population. The area is also sometimes referred to as Little Moscow.

Around 40% of residents travel by public transit, slightly higher than Toronto's average. There are two subway stations within or close to Clanton Park. Sheppard West subway station is located at the northwest corner of the community, and Wilson Subway is at the southwest corner. Several bus lines also go to many destinations operating through the neighborhood. Both Allen Road and highway 401 border the community for car commuters.

Anchored by several global retail chains such as Costco, Bestbuy, and Homedepot, Downsview Smartcentres is located at the southwest corner of the community. South of the Smartcentres is Yorkdale Shopping Centre, the third largest indoor shopping mall in Canada by floor space. Over two hundred and fifty retail stores, restaurants, and entertainment outlets offer unrivaled shopping experiences for visitors.

Clanton Park is an up-and-coming community with many young families moving to the area to enjoy the fantastic amenities and convenient public transportation. If you plan to move to Clanton Park or you want to learn more about real estate investment opportunities in North York, please contact North York realtor agent Alan Zheng.