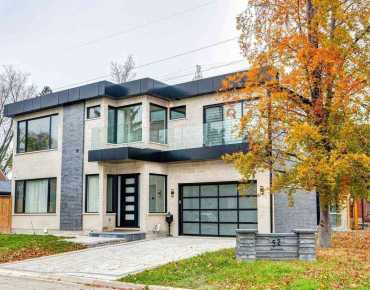 Newtonbrook west is on the North end of North York Toronto, neighboring Vaughan. The community is the Home to Centerpoint Mall, which is anchored by national retail chains such as Canadian Tire and Hudson Bay and has over a hundred stores.

This area of North York is dominated by detached, while semi-detached houses, townhouses, and condo apartments are prevalent along the main streets of Newtonbrook East. About 20% of housing was completed before 1960, and 42% was constructed between 1961 and 1980. Many detached bungalows sitting on an extensive front lot have been gradually transformed into custom-built modern homes. There are also many rental Apartments and social housing located close to Bathurst Street near Bathurst Lawn Memorial Park. Newtonbrook West has around 47% of residents who are renters.

About 41% of the residents are of East and Southeast Asia origin and 39% are of European Origin. The neighborhood along Bathurst is known for its Russian populace, with a large Russian Jewish population. The area is also sometimes referred to as Little Moscow. Filipino, the second largest demographic group, scatters across the community. Close to Yonge street, there is also the second largest population of Koreans in Toronto, next to Little Korea downtown. Here also lives a large number of Chinese and Persian.

Around 43% of residents travel by public transit, higher than Toronto's average. Finch bus terminal, located at the southeast corner of the community, offers 10 TTC bus lines, 11 YRT bus lines, and 19 GO bus lines. Furthermore, the Nearby Finch subway station connects the central transit system to downtown Toronto. Car commuters can drive onto highway 401 from the community via Yonge Street.

There are abundant shops in and near Newtonbrook West. Centerpoint Mall is located in the community's Northeast corner, with over a hundred stores, including Hudson Bays, No Frills, Beer Store, Tim Horton, Canadian Tire, Canada Computers & Electronics, numerous restaurants and banks, and telecom stores. Along Yonge Street, there are several Persian groceries and Korean restaurants. Moreover, east of Bathurst Street, close to Steeles Avenue, Bathurst Steeles Mall is a small shopping plaza featuring a Metro Supermarket, restaurants, Banks, and service stores.

Newtonbrook west is a highly diversified community with convenient public transit and plenty of shopping and restaurants. From entry-level condo apartments to much more expensive multi-million luxurious houses, buyers will have the opportunity to find dream homes in this community. If you plan to move to Newtonbrook West or you want to learn more about real estate investment opportunities in North York, please contact North York realtor agent Alan Zheng.